A few more galleries have trickled in. If you were there and took digital footage, we'd love to get a copy of it (even if you'd rather not post it publically,

deliriumdreams and I would appreciate a private copy as well). As before, click on the pictures to go to the full galleries.

nirikrss came down from the Denver area with his greyhounds. He snapped a few casual shots; the picture link goes straight to his gallery, but he also wrote up an entry on his trip. 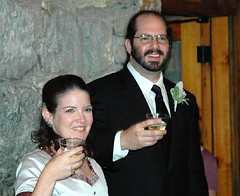 V came up with his wife L and kiddos R and Z. (They also gave our friend A a ride up, so that worked out really well.) We've known them for years, although we usually only get to see them when we make it down to Las Cruces. He got some great candid shots.

Spamgod got his nickname before the wave of unsolicited e-mail crashed over the 'net, and he's been brave enough to keep it since then. While he was kind enough to take footage as a favor to a friend, he's also a founding member of Lizard Light Productions (along with V above, although V has had to pursue other activities in the meantime). If you need any digital multimedia created, they're in the Phoenix area and would be happy to talk with you about it. :)

Thanks again to everyone who came, took pictures, and shared them back with us -- we really appreciate it. :)